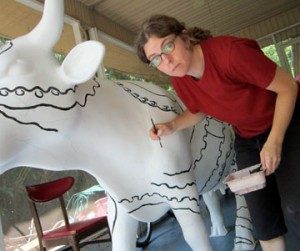 Biography and Scraps of Information

Back in the old days, when Granny’s broom was the most  useful tool in the house, and Uncle Harv’s pipe meant home,  that’s when it all began.

On a cold and terrible day in mid Michigan, a secret board in the attic  was pried up, revealing an old cigar box. Under an inch of dust,  the lid was opened. Out fell a tied up bunch of papers and a  slug from a rifle. Curiosity wouldn’t stop there. After opening the stack  and placing the slug squarely on the floor, the stories began…

Surrounded by soap boxes from the 1910’s, and advertising posters  from the 1890’s, and a musty smell that lingered in the nostrils,  these images never left her brain’s right hemisphere. As she went  on in life, she was ever haunted by images of happy people  drinking beverages from 1912.

Escaping the winter doldrums and endless grey skies of  the Great Lake State, she wandered the country off and on over  5 years, eventually meeting her other half, Curtis Eller, at a  musical instrument store. They traveled south to join a theatre troupe  made up of 20-odd individuals. After three years of making posters,  t-shirts, and other pictorial items, she greatly desired to go  to art school to learn what life could not teach.

The year nineteen hundred and ninety five saw her and her man in  New York City. She attended the School of Visual Arts and graduated  with a BFA with Honors in 1999.    After sixteen years in the big city, they wandered south again,  in search of space, oxygen and a good school for their daughter.

She currently resides in North Carolina with Curtis  and their little daughter.  They call her Daisy Josephine.